As promised, I am sharing the clip I submitted to audition for Cirque du Soleil’s Michael Jackson Immortal show.

In 2010, news started spreading that Cirque du Soleil and MJs Estate were planning a collaboration unlike any other. While reading up on this, I found the casting call for dancers for the show. From what I recall, the criteria basically asked for someone with dancing technique who believed in Michael Jacksons message. Sitting in my small dorm room in Washington, DC starting my junior year of college, I decided to give it a shot. I was not a member of a dance company and I had not performed on stage since high school, but I felt I did have something to add. Also, at that time, I was not doing any writing or media production yet…I didn’t even have a camera. Luckily, I had digitize some footage from plays I did in high school. In my dorm I choreographed a routine for “Wanna Be Startin Something” and practiced sharpening my repretoire of MJ moves. I was also excited to use my recently made MJ jacket (more on that later).  I spent about a month and a half editing my audition clip to match the listed requirements. Finally, I uploaded the clip to the audition portal and mailed a DVD to their Canada address. Their rejection letter was generic, but polite. I knew the other candidates probably had better footage and experience and connections, but for a moment I felt I might have a chance to take part in something wonderful and MJ related. Come to think of it, the majority of my memorable experiences in life were lead by overcoming the fear of the unkonwn and just putting myself out there. I believe that if you are in control of the situation, you have nothing to lose but a missed opportunity. A year later I did see the Immortal show in Las Vegas. You can view my comments on that on my previous blog. 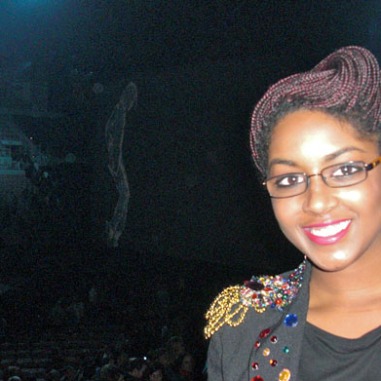 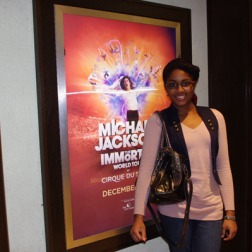 During the summer of 2010, I had brought closure to Michael’s passing and started a new chapter in my impersonation catalogue by creating my own MJ jacket. In May I had sketched some outfit ideas to go with my new black and white tuxedo shoes, but none of my ideas were coming together like I knew they could. In June I traveled to L.A. to visit Michael Jackson’s grave site to mark the one year anniversary of his passing. It was an emotional trip and seeing so many people come from all over the world to celebrate one person was sad and beautiful. Everyone was dressed up in either MJ fan accessories or full impersonator attire. I wrote a note to Michael and attached it to a red rose and a green mini-lock to symbolize my continued love for MJ and promising to leave the pain and mourning behind to move on with my life. It is sometimes difficult to articulate this type of connection to people who might not be big MJ fans. It’s more than just liking the music or knowing the words to a song. I noted that everyone there agreed that they felt Michael was a part of their family. Everyone I spoke to had a story about how MJs song, video, poem, or performance made a difference in their lives. To mark the exact time of his passing, everyone gathered near the barricades that were closest to the entrance of the colosseum, held hands, and sang “Heal The World” and “Cry” together. It was really beautiful. I also left a candle near his star on the Hollywood Walk of Fame. 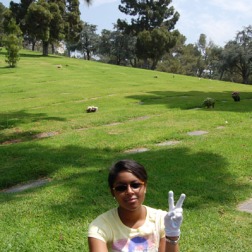 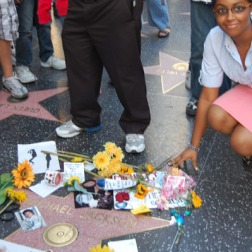 Returning from that trip inspired me to finish my sketches and create my own MJ jacket. As a female impersonator, I wanted the design to be influenced by MJs style and also incorporate my love for color and vintage pieces. After some dedicated thrifting, I found some vintage jewelry broches and beads that fitted perfectly with my concept idea. I also bought sequins, jumbo clothes pins, plastic jewelry, and hot glue from Wal-Mart. It took me about two months to make the jacket. I sewed the broches and beads to the shoulders and glued the sequins and individual jewelry pieces one-by-one on the rest of the jacket. I also added a red ribbon band for the arm like Michael would wear. Once it was completed, I decided to call it the “HERstory Jacket.” Naturally, I had to do a photoshoot to savor my new creation. 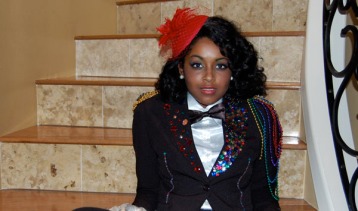 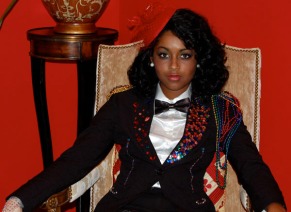 Before Michael Jackson’s passing in 2009, that year was going to be the best time of my life. I remember how excited I felt when I saw his press conference announcing his last concert. That emotion quickly transformed into anxiety when Ticketmaster claimed they were sold out. I did get a ticket via Viagogo.com in March of 2009. Words cannot describe how elated I was. I even helped him pick the song list…according to the voting campaign that was on his website. I do remember feeling a little worried when the increased number of concerts was announced and later the shift in a later starting date, but I knew the show would still go on. This was going to be the perfect icing on the cake…to experience my icon LIVE.

I always felt drawn to him as an artist and person, but it was in 6th grade when I started to follow his work and collect everything I could find about him. At that time, in 2001, he released the Invincible album and had re-released all of his previous albums as special editions and his videos on DVD. Before that, the only MJ stuff my family had was the Off The Wall album and the HIStory Volume I VHS tape. I remember re-watching that tape so many times when I was in kindergarden, fascinated by the different characters and movements. Returning to 2001, one day, while watching one of his DVDs, I paused the clip, stood up, and tried to do the front-kick. I don’t remember what caused me to try this, but next thing I knew I was practicing the moonwalk, the side-kick, the neck-roll, the robotic moves…even the way he walked on stage. I started choreographing routines to almost all of his upbeat songs. Even if his music was not playing, I would imagine routines in my mind. Along with this, I continued to read everything I could find about him. This was before YouTube existed, so I would check VH1.com to search for any schedueled TV appearances of Michael. It had become more than just being a fan, the art of Michael Jackson became my hobby. For years after that, people around me knew me as the Queen of Pop and always found MJ related gifts for me.

I really enjoyed those days, not only because of the challenge and inspiration to continuously improve my routines, but also for the fun I could see my audiences having by being entertained. There was no promise of a contract or fame and I never did meet Michael Jackson, but this was my creation that I felt needed to be shared. To this day, he is still one of the few artists that continue to inspire me regardless of what I’m going through or how old I am. To me his legacy will always represent love. He encouraged me to be true to myself, nurture my creativity, moonwalk out of my shell, and see the world as full of loving possibilities. I hope this post was able to share some of that with you.

View all posts by Dagny Zenovia

2 thoughts on “My HERstory with Michael Jackson & Cirque du Soleil”